I Wanted to Quit as a Leader. One Year Later…

Last year as a leader? Absolutely. That was me. 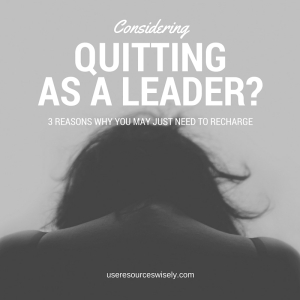 My fifth-grade year was probably my toughest year of being a scout leader. I had a co-leader whose daughter was not engaged. I had half my troop who were torn between other activities and scouts. We had a Bronze Award project that everyone wanted to do … until it came time to doing the work. We had sniping. We had rude comments. It was tough.

No. It was painful.

As I approached the end of the year, I didn’t know if I’d have a troop even for Cadettes. We had two girls do the Early Bird. I was prepared to have a Juliette-like troop and do the best experience for the girls who were staying.

And then I was surprised.

I had a friend and her daughter transfer to our troop. They love the outdoors, and now I had that needed second adult for hiking and campouts.

I had another girl surprisingly re-up. And over the course of the year she went from “this is boring” to “what are we doing next?”

And council surprised me with two additions to our Cadette troop. And while they aren’t at every meeting, they do offer color and new opinions to our group.

If I hadn’t continued this year as a leader, I wouldn’t have met these girls and their families.

If I hadn’t continued this year as a leader, I wouldn’t have made new adult friends and connections in our community.

If I hadn’t continued this year as a leader, I wouldn’t have tried new experiences like making shoes for kids in Uganda, participating in multiple Honor Flight homecomings, creating anime,  going to a Burmese festival, and taking the girls to the Indiana Dunes.

I wouldn’t have shared these experiences with these girls.

I wouldn’t have grown as a person.

Do I still have parents who miss deadlines? All the time.

Do I wonder if being a Girl Scout leader is worth it? I know it is.

Disclosure: Use Resources Wisely is a participant in the Amazon Services LLC Associates Program, an affiliate advertising program designed to provide a means for sites to earn advertising fees by advertising and linking to amazon.com. These fees help support the cost of this blog and offset many of our scouting adventures.
Loading Comments...
Comment
×
%d bloggers like this: