Blessed Junipero Serra will be canonized as a saint by Pope Francis on Sept. 23 in Washington, DC. Why not mark the occasion by earning a patch inspired by this soon to be Saint? 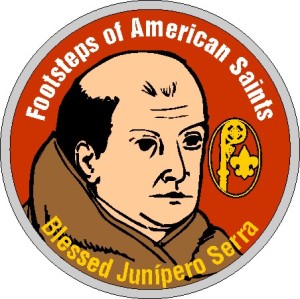 Blessed Junipero Serra, a Franciscan missionary priest who ministered in present-day California in the 18th century, was a Spanish missionary who baptized thousands of Native Americans, may be a controversial figure, but it shows that even Saints are human in nature.

What I appreciate about these religious activity scout patches is that not only do you learn the biography of a saint, but you also learn about his or her values and do service to our community.

For the Junipero Serra patch,  one such option is to pen and participate in a fundraising event like a 5k for mission work in your community. It’s in honor of the fact Fr. Serra traveled 900 miles before starting his first mission.

Want more ways to mix your faith with scouting?

Sign up for updates on Catholic programs for scouts from Use Resources Wisely.